Meta-analyses conventionally adopt a frequentist approach, in which a p-value is used to make a binary decision regarding the presence of an effect. While correctly used p-values can be useful, using a Bayesian framework can provide a number of benefits for the meta-analyst. However, Bayesian meta-analysis is uncommon, probably due to a historical lack of accessible software options for performing these tests. So in this post I'm going to outline the benefits of Bayesian meta-analysis and a step-by-step guide (with code) on to perform one using the relatively new "RoBMA" R package.

I've previously outlined the benefits of using a Bayesian framework for hypothesis testing in a 2018 paper, but there are two benefits that are particularly interesting for meta-analysis, which are worth covering before diving into the code.

First, Bayes factors are an intuitive metric for describing and understanding the relative evidence for two models, typically an alternative model vs. a null model. So using this approach, one could say that there's 12 times more evidence for an alternative model compared to a null model, for instance. Of course, frequentist meta-analysis can be reported with effect sizes, but interpreting effect sizes can be difficult, as Cohen's benchmarks of small/medium/large effects are not universal across research fields.

To illustrate the differences between a frequentist and Bayesian meta-analysis, I'm going to use an example that I've used for a previous tutorial paper for a frequentist meta-analysis. This dataset contains 17 studies that report the correlation between medication adherence and a measure of conscientiousness.

Let's run a frequentist analysis and construct a forest plot to visualise the result using the following script:

Here are the results, followed by a forest plot:

Eyeballing the funnel plot suggests that the distribution of effects is fairly symmetrical. Egger's regression test was non-significant, which suggest either that there is either no asymmetry or the data were not sensitive enough.

Next, let's use an approach that that has been designed to specifically assess publication bias: weight-function models. In short, weight-function models provide a greater weight to studies that were less likely to have been published, based on their associated p value, for the estimation of a summary effect size. For example, it is a fair assumption that a study with a p value of 0.001 is more likely to be published than a study with a p value of 0.45. Other methods for publication bias detection and correction have been proposed, but weight-function models seem to perform the best across a range of situations (e.g., high heterogeneity).

There are various approaches for selection models (e.g., a beta model, a power model), but here we will use the Vevea and Hedges (1995) step function approach, which is implemented in the weightr package:

This output might be new for many people reading, so I'm going to walk through it.

The "model results" section displays the conventional results, in terms of heterogeneity and effect size estimates. Note that the results are not exactly the same as our first analysis above, this is because the weightr package converts correlations to Cohen's d effect sizes for the analysis, and then transforms these results back to correlations.

The "adjusted model" section includes results accounting for publication bias (note the results in the "intercept" row). The summary effect estimate has shrunk from 0.15 to 0.09, and it is now very close to the threshold of statistical significance. (p = 0.04). A formal comparison of these two models, which tests for publication bias, was statistically significant using a threshold of p = 0.1, which has been recommended by Renkewitz & Keiner, along with Begg & Mazumdar.

As mentioned above, but worth repeating, Bayes factors are values that represent the relative evidence for two competing models, without requiring a strict cutoff. This means that we can do away with the need for making a binary decision when it comes to evaluating the presence of publication bias.

So let's now jump in and perform Bayesian hypothesis tests using the RoBMA R package. This package generates three families of models, across 12 models, then averages their performance. These models vary on whether they're fixed or random effects models (i.e., assuming heterogeneity), a null or alternative hypothesis models, or whether models include the presence of publication bias or not. In terms of publication bias models, separate models also use a two-step approach (significant or non-significant) or a three-step approach (significant, marginally significant, or non-significant). For more information, see Maier and colleagues.

Before running this analysis, just keep in mind that this can take some time, depending on the speed of your computer. It took my five-year-old MacBook Pro just over five minutes to complete these analyses, for reference.

The "Model-averaged estimates" section contains an estimate of the summary effect size (mu), which was 0.13. Keep in mind that this is the values that is averaged across all models, including publication bias models, so this is a publication bias adjusted value.

Let's compare this model-averaged estimate against the a model that parallels the conventional frequentist approach: A model that assumes an effect with heterogeneity and no publication bias (i.e., a random-effects meta-analysis). This is model #10 in our analysis, and information for this model can be found by entering this command: summary(fit, type = "individual"). This command will list information from all 12 models (output not shown here for the sake of space). For model #10, the mean estimate was 0.15, which mirrors our conventional frequentist analysis above.

We can also plot these results using this command: plot(fit, parameter = "omega")

It's also important to check the diagnostics of these 12 models to identify any issues. Rhat convergence and the effect sampling size (ESS) provide a summary of Markov chain Monte Carlo (MCMC) convergence for the appropriateness of drawing inferences. It's recommended that Rhat convergence values should be under 1.05 and that the effect sampling size (ESS) is sufficiently large. There's no clear rule-of-thumb for what constitutes a "large" ESS, but even an ESS of a few hundred is fine if you're only interested in the posterior means. We can easily generate a summary including diagnostics with this code:

For all of our models, the largest Rhat convergence values [the max(Rhat) column] column was 1.001 and the smallest ESS [min(ESS) column] was 7776, so we can be confident of good MCMC convergence, and be on our way. If Rhat convergence values are over 1.05 or ESS values are below a few hundred, then you can try re-running your analysis with an increased number of sampling iterations and burnin. Of course, this will take longer to compute.

In summary, our analysis revealed only very small evidence in favour of presence publication bias. Consequently, there is was only a very modest reduction in the size of the summary effect estimate after adjusting for publication bias. 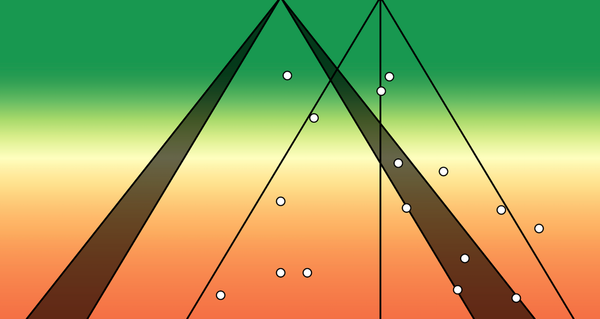